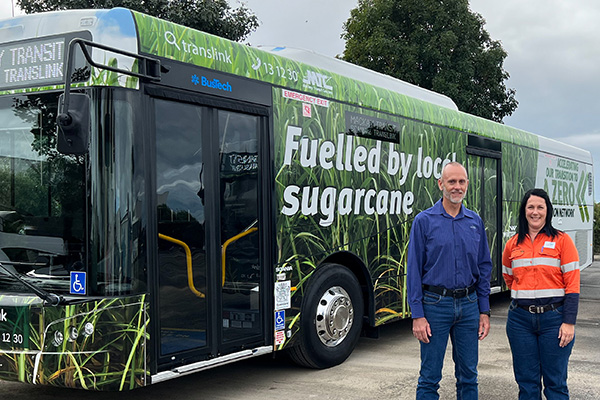 Bioethanol made at our Sarina Distillery is being used to power state-of-the-art buses that have hit the ground in Mackay.

The two Scania-owned buses will be the first of their kind used on Queensland public transport. They will be powered entirely by bioethanol derived from Queensland-grown sugarcane.

"We’ve been making ethanol from molasses at our distillery for almost a century, so it’s fitting that we provide the fuel for the first formal trial of biofuel buses in this region," Mr Van Vuren said.

“We’re very proud to be part of a trial where bioethanol manufactured at Sarina is used to power buses in our own backyard.”

Translink delivery partner Mackay Transit Coaches is testing the buses ahead of the planned start of passenger services later this month.

Member for Mackay Julieanne Gilbert praised the benefits of the 12-month trial, for both employment and the environment.

“Bioethanol is more environmentally-friendly than traditional fuel used on many buses and I’m so pleased that Sarina based Wilmar BioEthanol Australia will be producing the fuel for the trial,” Ms Gilbert said.

“With Scania’s research indicating these bioethanol buses could reduce carbon by up to 90 per cent compared to traditional fuel, we’ll be watching this trial with excitement over the next 12 months.

Ms Gilbert said the Queensland Government was committed to a cleaner, greener future and this trial had the potential to influence state-wide demand for biofuels as a renewable fuel source for transport.

“We’re proud to be part of this project and eager to start giving customers a new experience on the buses,” Mr Forsyth said.

“Together with the Queensland Government, we’re working towards greener public transport in Mackay and this is another step towards that objective.”

Queensland Manager for Scania Bus Brian Thompson said Scania had committed around $1 million to the trial.

“This covers the provision of two rolling chassis and powertrains suited to ethanol fuel, as well as investing in the Australian-built bus bodies and the cost of installing a fuel depot at the bus company where the bulk and locally produced fuel will be stored,” he said.

“This is a significant investment for Scania, aimed at underlining our leadership of the shift towards a sustainable transport system.”