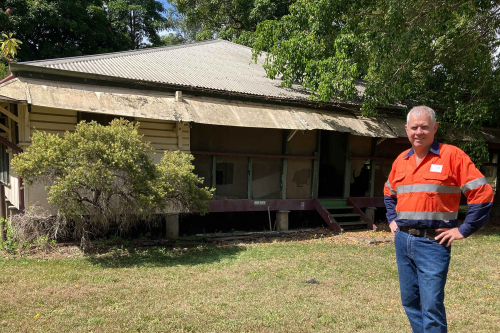 House 15, a historic Queenslander at our Inkerman Mill estate, has been sold for relocation.

After more than 100 years at the Inkerman Mill estate in Home Hill, the timber and corrugated iron house, affectionately known as House 15, has been sold for relocation and a fresh start in Townsville.

The building has accommodated dozens of mill employees and their families over the past century but has not been used as a home for many years.

In the spirit of reusing and repurposing, it was decided that, rather than demolish the piece of rich milling history, it, and three other vacant Queenslanders on the estate, would be offered for sale to the public.

Technical Services Manager Russell Kirk and his family were among the last to call House 15 home. After moving to the Burdekin, the Kirk family was in need of temporary accommodation while the house they owned in Ayr was undergoing renovations. This was expected to last only a couple of months.

Mr Kirk said the mill house was not in good condition when he first visited it, and spent several weekends tidying it up before the family moved in.

“The old house had a few holes and some bouncing beams under the floor but it was a large and surprisingly comfortable old house,” he said.

“In that first couple of weeks while getting the house cleaned up, I had a little incident where I came face to face with a big black snake which had been curled up on the window sill right behind my neck.

“Now, my wife makes no secret of the fact that she is petrified of snakes, so I wasn’t about to tell her there was one in the house she was about to move into. That would have to remain my little secret if we were to have somewhere to live.”

The renovations on the Kirks’ Ayr home took longer than expected, so the family ended up calling House 15 home for almost three years. Mr Kirk said that, in that time, the family enjoyed living on the Inkerman estate, and formed friendships that remained today.

“After a few years we finally packed up and moved ourselves to Ayr and left the old house to gather dust and snakes,” he said.

“We have dropped in occasionally to take a look at the old place, and it is sad to see it deteriorating, so it’s great to know it will get a new chance at life.”

Self-proclaimed “Queenslander Crusader” Jo Veneman, from Townsville-based Renewable Homes, was thrilled to strike a deal with Wilmar to secure the four houses for sale and removal.

“It was an effort to preserve history, and save the houses from further deterioration,” Ms Veneman said.

“Removing and selling them saves Wilmar from demolition costs, and will give the houses a renewed life.”

House 15 is expected to be removed in August. It will be split into three sections to make the journey across the Burdekin Bridge, then transported to the Townsville suburb of Stuart, where it will be renovated and utilised as an extension to another Queenslander.