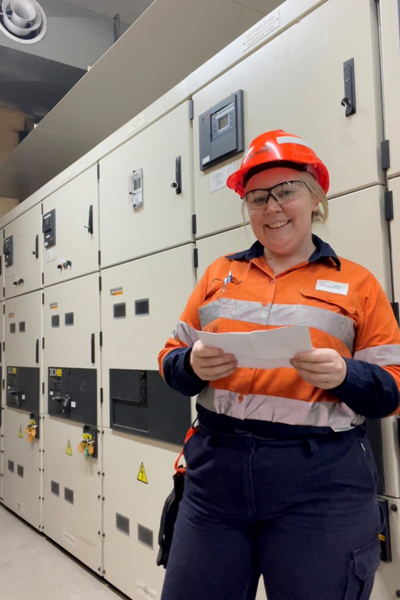 Electricity is at the core of Marnie Auld’s role, yet the first-year engineer began her life in a house without it.

The first home Marnie recalls living in with her mother and two older siblings was completely off-grid, with tarps for walls and missing floorboards.

“The house (situated outside of Cardwell in North Queensland) was planned as someone’s dream house but never completed, and I can only assume we lived there for the extremely cheap rent,” Marnie said.

“We had a generator for a small fridge with limited food like milk and butter, but I primarily remember eating a lot of home-grown vegetables, pantry staples and having the occasional barbecue.

“We had a makeshift shower structure that was just timber planks propped up on bricks, surrounded by corrugated iron, and a ‘donkey boiler’ that we had to light a fire under each afternoon to have warm showers.

“I absolutely hated that whole experience because snakes would often hang out there for warmth and come up through gaps in the flooring, and were very hard to see with just a lantern illuminating the area.”

When a storm brought down a tree on the house, wiping out the kitchen and one bedroom, Marnie (then aged seven) and her family got to move into a house in town.

Importantly for Marnie, the new house had a flushing toilet and snake-free shower, as well as electricity to watch morning cartoons… and to investigate.

“I’d been told the obvious things, like not to stick forks in power points and toasters, but didn’t fully comprehend the dangers of live electricity in equipment,” Marnie said.

“When I was about 10 years old, I decided to take apart a 240-volt fish filter while it was still plugged in, to see how the LED light on it worked.

“I touched the LED light momentarily, felt a tingle and saw the light dim, so touched it again and suddenly was getting electrocuted. My hands gripped on to the filter and I couldn’t breathe or move, and could smell smoke.

“It was an all-round terrifying experience but I eventually dropped the filter and ended up with eight small burns on my fingers and two larger burns near where I’d directly touched the part, and still have scars there.”

It’s an experience that Marnie says gave her a strong appreciation for electrical safety practices but certainly did not dull her love of electricity.

Having lived well below the poverty line her entire life, Marnie left school at 15 to get a full-time job, and worked for seven years in an office job.

“Going to university, especially doing something as complicated as engineering, seemed entirely out of reach for me and it was always expected that I would take whatever unskilled jobs became available to me throughout life,” Marnie said.

“But I felt really stuck and like I wasn’t using my brain enough, so eventually enrolled in a bridging course to get my high school equivalency and ended up joining the robotics club at James Cook University. I immediately felt like I was among my people.

“Now working as an engineer, it’s still pretty awe-inspiring to learn about the large scope of work engineers can be responsible for, and to think about the powerful thinking that goes into everyday things.

“It’s also fun to see in real life the theoretical knowledge I learnt in my degree and realise that I have really only begun to scratch the surface on a lifetime of learning.”