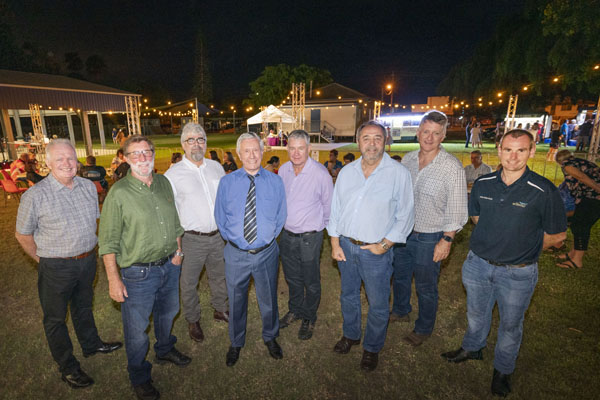 Community celebrations originally scheduled for August were postponed due to COVID-19 uncertainty at the time.

Invicta Mill Production Superintendent James Wallace said it was great to finally get the chance to properly celebrate Invicta’s milestone with the Giru community.

“We were fortunate to have seven past mill managers return for the event, alongside many other current and former employees who have been instrumental to the success of Invicta.”

The morning ceremony, which involved students from Giru State School, included the sealing of a time capsule, and the dedication of the refurbished Invicta locomotive, which is now on permanent display at the mill’s entrance.

Invicta Mill’s current longest-serving employee, Phil Hervey, who has been part of the team for 51 years, cut the celebratory birthday cake with one of the mill’s newest employees, Elias Papidimitriou, who joined as an apprentice this year.

Wilmar’s General Manager Production and Technology Jay Venning, who is a former manager of Invicta Mill, said it was great to see so many people come together to celebrate the milestone.

“Invicta is a very special place for me, for Wilmar and for the sugar industry. It’s the biggest mill in Australia and has a lot of new and unique technology,” Mr Venning said.

“It’s had a lot of challenges that have been resolved by a lot of very capable people, many of whom came before me.”

John Baird, also a former Invicta Mill manager, said there was a great turnout for the event.

“It’s been great meeting up with some friends I hadn’t seen for 30 years. I thought the mill did a great job of the celebrations,” Mr Baird said.

The festivities also included bus tours through the factory, and an historical exhibition displaying photos, mill records and other memorabilia.

Mr Wallace said more than a year of planning had gone into the celebrations.

“Our centenary committee did an amazing job, as did everyone at Invicta who helped out in the lead-up to the event and on the day, as well as the Giru Progress Association, the Giru QCWA ladies, and the Giru State School,” he said.

“It was a special day, befitting of the milestone, and we thank everyone who helped us celebrate.”

Invicta Mill started its life on the Richmond River in New South Wales in the 1880s before being relocated to South Kolan, near Bundaberg, in 1906.

It was moved north to the Haughton River in the Burdekin in 1919, where the township of Giru grew around it. It commenced crushing there on 4 August 1921.