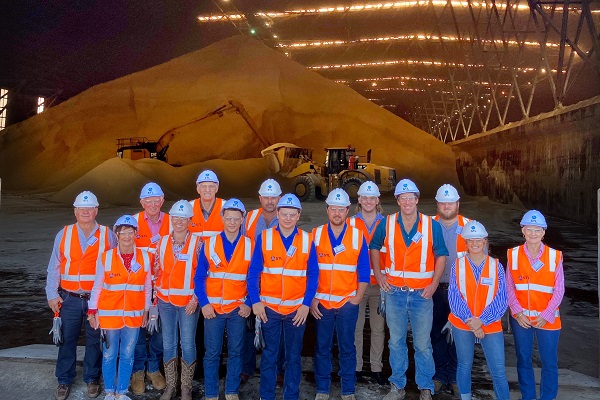 We've shipped our first 2022 season raw sugar out of Townsville.

A group of Burdekin cane growers witnessed raw sugar being loaded for export at the Port of Townsville last week.

The raw sugar – manufactured at Wilmar’s Burdekin mills from sugarcane supplied by Burdekin growers – was loaded onto the KM Jakarta bulk carrier, destined for South Korea.

It was the first of Wilmar’s new season sugar to be shipped out of Townsville this year.

“It was a really informative tour and the growers thoroughly enjoyed it. They got to see raw sugar that originated from their local mill and potentially, their farms, being loaded onto a ship destined for South Korea,” she said.

“They saw every stage of the sugar terminal process, from where the sugar is dropped out of the trains to be weighed and tested, to where it’s stored in the sugar sheds, to how it’s loaded into the ship.

“I’d like to thank Glen La Spina for facilitating and leading the tour.”

The first of Wilmar’s new season sugar from its Herbert mills was loaded at Lucinda Sugar Terminal, near Ingham, this week. The first Mackay shipment is scheduled for next week.