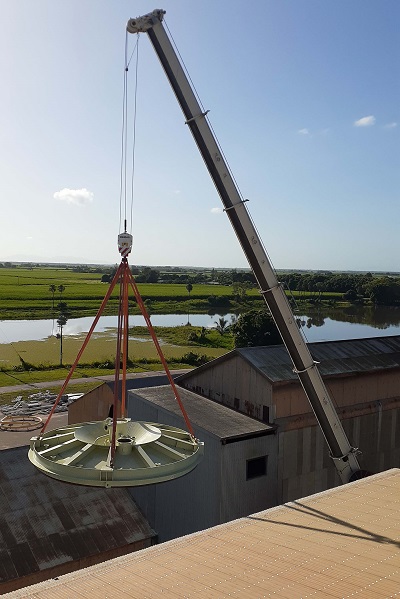 The first major component for a new, $6 million evaporator has been lifted into place at our Kalamia Mill.

Two cranes were used to lift the bottom cone of the vessel into the factory on Tuesday (15 February). The calandria will be lifted in next week, followed by the body later this month, and the top cone in March.

The new evaporator is the first of four replacement evaporators being installed at Kalamia Mill in the Burdekin region over the next three years, at a total cost of $25 million.

Project Engineer Chris Lammas said all four vessels were being engineered, fabricated and installed by Wilmar employees, as part of the company’s strategy of bringing large-scale manufacturing back in-house.

“We’ve drawn on specialist contractors for some portions of the job, but the vast majority of the drawing, fabrication and installation work is being done in-house by Wilmar’s Asset Management and Integrated Work Management teams.”

The evaporator is the stage in the sugar manufacturing process where water is evaporated from the sugarcane juice and concentrated into a syrup.

“The existing evaporators are of different sizes and capacities. The new ones will adopt a common design, each having a seven-metre diameter and a heating capacity of 3200sqm. This creates greater efficiencies in design and construction.”

The new evaporators are part of a much larger program to replace end-of-life vessels across all of Wilmar’s eight sugar mills.