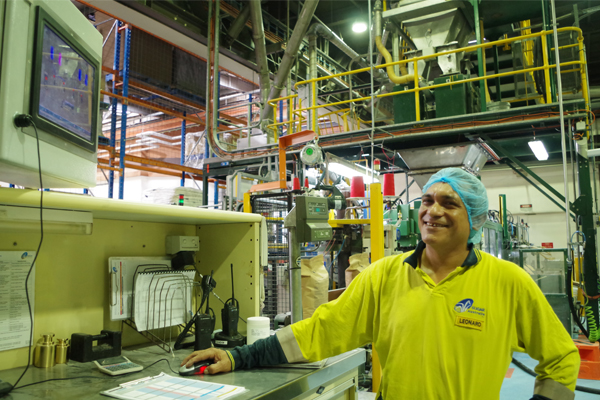 Affectionately known as ‘Doc’, Leonard has worked for Sugar Australia for 27 years, the past 23 of which have been at our Glebe Island Terminal in Sydney.

As Relief Team Leader, Doc is responsible for running the production line at Glebe and, at times, overseeing the entire factory.

Doc’s nickname originates from his tendency to be ever-ready to render first-aid on family holidays. But one could argue he deserves an honorary doctorate for his knowledge of the Fawema packing machine.

Doc’s our go-to when it comes to changing between 500g, 1kg and 2kg settings on the Fawema retail sugar packing machine – a process that takes about two hours each time.

He learnt the ropes of the Fawema machine at CSR’s former New Farm Refinery and Packing Plant in Brisbane, shortly after he first began with the company. When New Farm closed in late 1998, Doc was given the choice between transferring to our Mackay or Sydney operations, to operate the same type of packing machine.

The lure of being in town for the 2000 Sydney Olympics, and having family already based in the city, led to Doc joining the team at Glebe Island Terminal on the beautiful Sydney Harbour.

Doc’s favourite part of the job? Getting to work along-side the rest of the Glebe team, and achieving efficiencies with the factory’s packing machines.