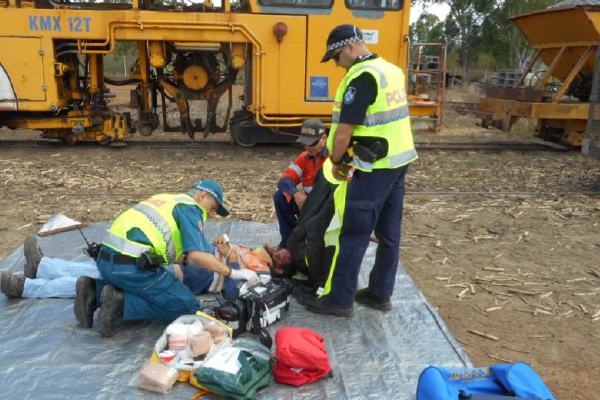 The emergency response readiness of Wilmar’s Proserpine crew was put to the test during a mock incident.

The emergency response readiness of Wilmar’s Proserpine crew was put to the test during a mock incident on the company’s cane rail network on Wednesday 21 November.

Proserpine Cane Supply Manager Tony Marino said the exercise had been organised as a way for all parties to test response times and review current emergency processes. “The loco was positioned on a short section of track just inside the mill confines, and two of our employees volunteered to act as the injured parties,” Mr Marino said.

“We wanted to ensure employee response to the mock incident was as realistic as possible so we didn’t give them any forewarning.

“This allowed us to observe and review Wilmar’s emergency response process.

“An employee was selected to act as the first-responder, calling in the incident to our traffic office operator, who then contacted local emergency services and dispatched an incident coordinator to the scene.”

The Queensland Ambulance Service sent two officers and an ambulance from nearby Proserpine Station to the mock accident scene.

A QAS spokesperson said the organisation was happy to take part in local exercises with other emergency services. Mr Marino said emergency response exercises involving cane trains were held across all of Wilmar’s milling regions annually.

“Safety is a priority for Wilmar and we are very focused on accident prevention. But emergency response preparedness is also important, which is why these exercises are so valuable.”